Fingernail, a keratinized protein like hair, is emerging as a popular specimen type for drug and alcohol testing. 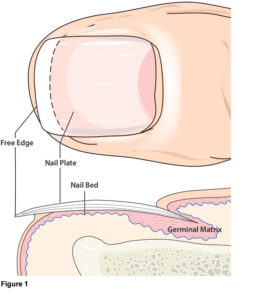 Using fingernail samples for toxicological analysis and pharmacokinetic studies has been around for decades. However, many people do not have as much experience interpreting the results as they do hair and urine and there is confusion of whether to use a clipping or scrapings. One of the most frequent questions to the  laboratory concerns the window of detection. How far back does the fingernail test go? To answer this, we need to  discuss the anatomy of the fingernail and how compounds are incorporated into the nail.

Nail is keratinized protein very similar to hair. It is porous and compounds become entrapped and bind within the structure. For this discussion, we need to know 4 anatomical features: the germinal matrix, the nail plate, the nail bed, and the free edge (Figure 1). The nail originates at the germinal matrix and grows outward toward the fingertip. The hardened material forming the nail plate grows across the nail bed, which is rich in capillary blood flow (this causes the pinkish color to your fingernails). As the nail grows in length, material is added from underneath such that the nail lengthens and thickens, as it grows outward toward the fingertip. Once the nail plate erupts from the nail bed and extends past the end of the fingertip, the part that extends over the edge of the fingertip is called the free edge. The free edge is the piece that you clip when clipping your nails. The entire process takes up to 6 months depending on the health of the individual.

Compounds are incorporated into fingernail by four main routes. The first route of incorporation, just like hair, is  environmental exposure. If someone is handling drug or around someone smoking drug, the drug gets on the nail and works its way into the pores and binds to the keratinized protein. The second route of incorporation is the sweat and oil of the skin surrounding the nail deposit drug and drug metabolite into the nail.

The third route of incorporation is the blood flow in the germinal matrix deposits drug and drug metabolite into the nail when it is formed. Lastly, drug and drug metabolite are deposited to the underside of the nail plate by the blood flow in the nail bed. These four very different routes of incorporation are superimposed on top of each other rendering a very complex drug history picture. 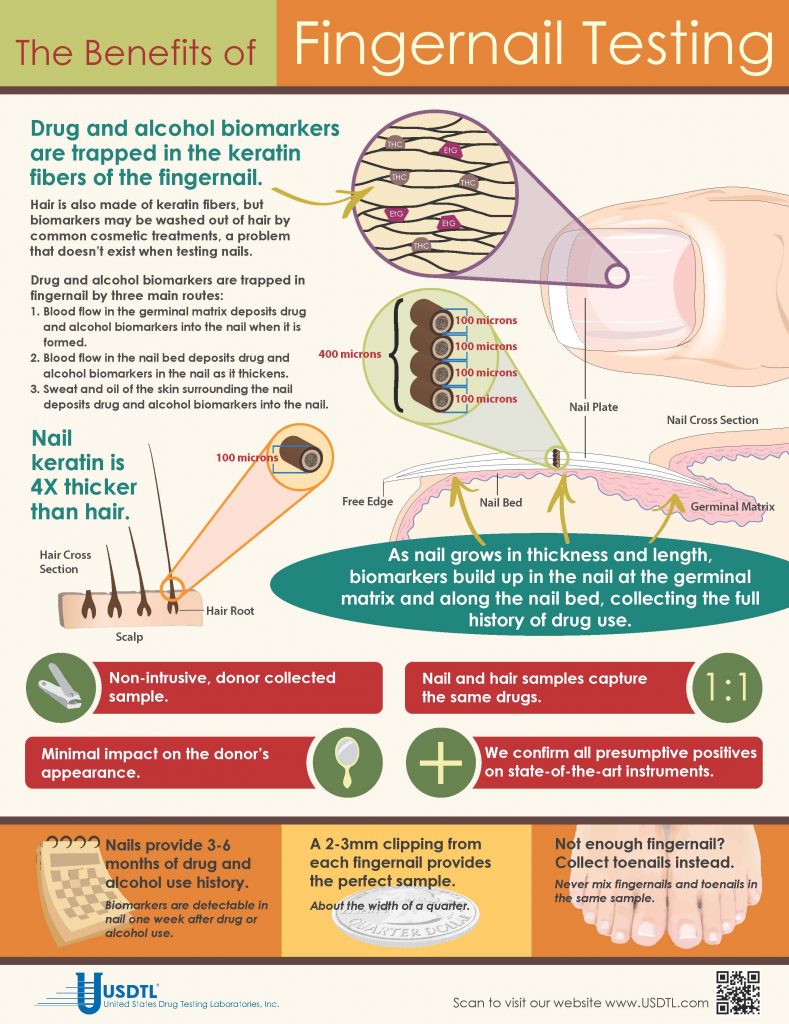 In conclusion, for fingernail clippings there is a potential for a detection window of up to  6 months. Just like hair and urine, a negative result is not proof of abstinence, just the lack of evidence. A positive fingernail result for most drugs may be explained by drug use at any point during the 6 months prior to the collection. Being that the clipping contains the entire drug history of the growth of the nail, a nail scraping is not necessary.

Please call our team to discuss any assessment issue without obligation.